Are you Blu in The Republique of Wine Country? 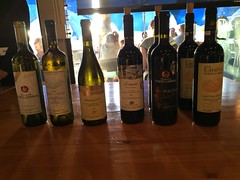 Prepping for the Taverna Blu tasting

The last couple of weeks have been a bit of a whirlwind. We went from San Luis Obispo to Los Angeles down to San Diego and back to LA, then it was up to the Central Coast, Davis and Berkeley. The first leg of our trip headed down to San Diego and included a stop at a great little Greek restaurant, Taverna Blu, owned by George Katakalidis a great guy who is an ex professional soccer player turned restaurateur. 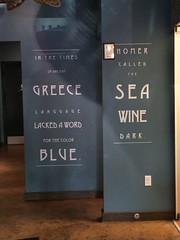 We set up a table to display 6 of the Domaine Porto Carras wines namely 2013 Athiri, the 2013 Melissanthi a blend of Athiri and Assyrtiko and named in honor of Dionysus’ daughter Methe, 2013 Malagouzia, 2011 Limnio, 2010 Magnus Baccata, and the 2005 Chateau Porto Carras. This allowed us to pour tastings for the restaurant patrons as well as those attending the wine pairing dinner. The dinner started with family style appetizers of cheese and Greek country olives, and chicken pesto flatbread which along with an Athenian Greek salad, we paired with the Porto Carras 2013 Athiri. 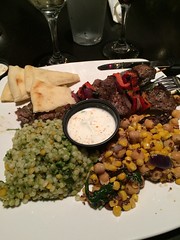 The main dish was a choice of Lamb, Chicken or Grilled Wild Salmon Kabobs initially paired with the 2013 Malagouzia and 2010 Magnus Baccata 50/50 Sarah-Cabernet Sauvignon blend, but due to a suggestion by me (after having the Salmon at dinner at Fundamental LA), they added the Limnio as well to pair with the Salmon. Since I had ordered the Lamb Kabobs my dish was paired with the Magnus Baccata and it went beautifully. The lamb is definitely complemented by the wine, but even more so with the “couscous” style grain with pesto side dish. The wine and the pesto were a match made in gastronomical heaven, the two paired together brought out the best herbaceous qualities in each. Finally for dessert we had a Baklava Ice Cream Sundaes.

Initially the wine pairing had been set to go with each course but by about midway through the salad all that went to the winds and everyone was drinking and enjoying each wine as they wanted with whichever dish they chose. Sometimes the best laid plans are best when the plans go out the window! From what I could tell everyone had a marvelous time and enjoyed every ounce of what they ate and drank. 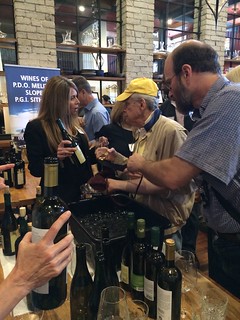 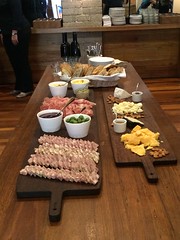 The following day we were back in L.A. for a co-industry tasting with the wines of Naoussa at Republique, with my counter part Wines of Naoussa Ambassador David Wilson, radio host and owner of the Grape Emporium wine bar in Atascadero. The restaurant was bustling and we went into the back area where we set up our wine displays. Republique served charcuterie (probably some of the best I’ve had) and cheese platters, which were absolutely divinely paired with all the wines! The industry professionals who attended were very excited about and complimentary of our wines. Always good news especially when they order the wines for their businesses to sell. 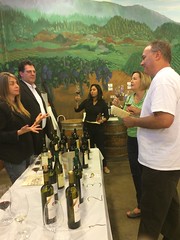 The Wine Country was our next destination, and is a great wine grocery store (about the size of a BevMo) in Signal Hill, with a large selection of wines from all over the world including Greece (hee hee). They had set us up in their tasting area and their customers came in to learn more about and taste our wines. I was really happy to see how excited people got when discussing the rich history of the vines, and property and how much they really enjoyed the wines.

I am proud to say that our Southern California leg was successful and the wines really showed beautifully. Introducing people and seeing their positive reactions to wines they’ve never had much less heard of, is such a fun part of my job as ambassador.

Keep an eye out for our next blog post, on the second leg of our trip from the Central Coast, north; where we make a stop in San Luis Obispo for a beautiful sunset evening on the cliffs of Lido at Dolphin Bay, visit UC Davis to learn about their sustainable viticulture and enology program, and our incredible wine pairing dinner at Pathos in Berkeley.

Drink is the feast of reason and the flow of soul. ~ Alexander Pope

2 thoughts on “Are you Blu in The Republique of Wine Country?”